A couple months ago I got into the mood for low-level programming and decided I might learn some assembly language. I had previously implemented a Tetris clone in C for bare-metal x86, but it had broken behaviour and wasn’t feature-complete, so I decided to give it another try. I chose the NASM assembler and targeted i386.

The end result is called Tetrasm, and is on GitHub.

Getting a kernel to boot was very simple, thanks to Multiboot and having already implemented it a couple times.

To create a Multiboot kernel, one simply has to stick some data at the front of their binary — the Multiboot header. The header consists of a magic number, a set of flags, and a checksum. In this case, no flags are needed.

Simple. The dd pseudo-instruction is used to declare double-word data in NASM.1 The header goes in its own section so that it can be positioned at the beginning of the binary in the linker script.

A linker script can be used to arrange the various sections of code (e.g. .text) and data (e.g. .data) in the compiled binary. The Multiboot specification requires that the header appear in the first 8192 bytes of the binary.2

This links the Multiboot header at 0x00100000 (this is where it will be in memory, not in the binary), followed by each of the conventional sections, page-aligned. The first line also declares the entry-point of the kernel, a label named boot.

The most important thing for the entry-point to do is set up the stack. For later use, it’s also a good idea to initialize the FPU.

The stack lives in the .bss section, or, uninitialized data. The resb pseudo-instruction is used to declare uninitialized bytes in NASM.3 Since the stack grows down on x86, the stack pointer esp is initialized to point to just after the highest address of the uninitialized memory. The base pointer ebp is also zeroed,4 just to be nice.

The FPU is then initialized with fninit5 before jumping to the main label.

Halt simply executes hlt6 in a loop, just in case. Reset divides by zero, which triggers a fault, but since interrupts are disabled and there are no fault handlers, a CPU reset occurs. This is, of course, not the correct way to reset an x86 CPU. But it works. More on that later.

With Multiboot and stack initialization implemented, it should be time to get “Hello, world!” on the screen. Unfortunately, that actually requires quite a bit more work, so a no-op will have to do for now.

To build the assembly files, NASM needs to be run with the -f elf32 format flag. The object files are then linked with ld -m elf_i386 -nostdlib -T linker.ld, assuming the linker script is linker.ld. The resulting ELF binary can then be booted directly by QEMU with qemu-system-i386 -kernel kernel.elf. 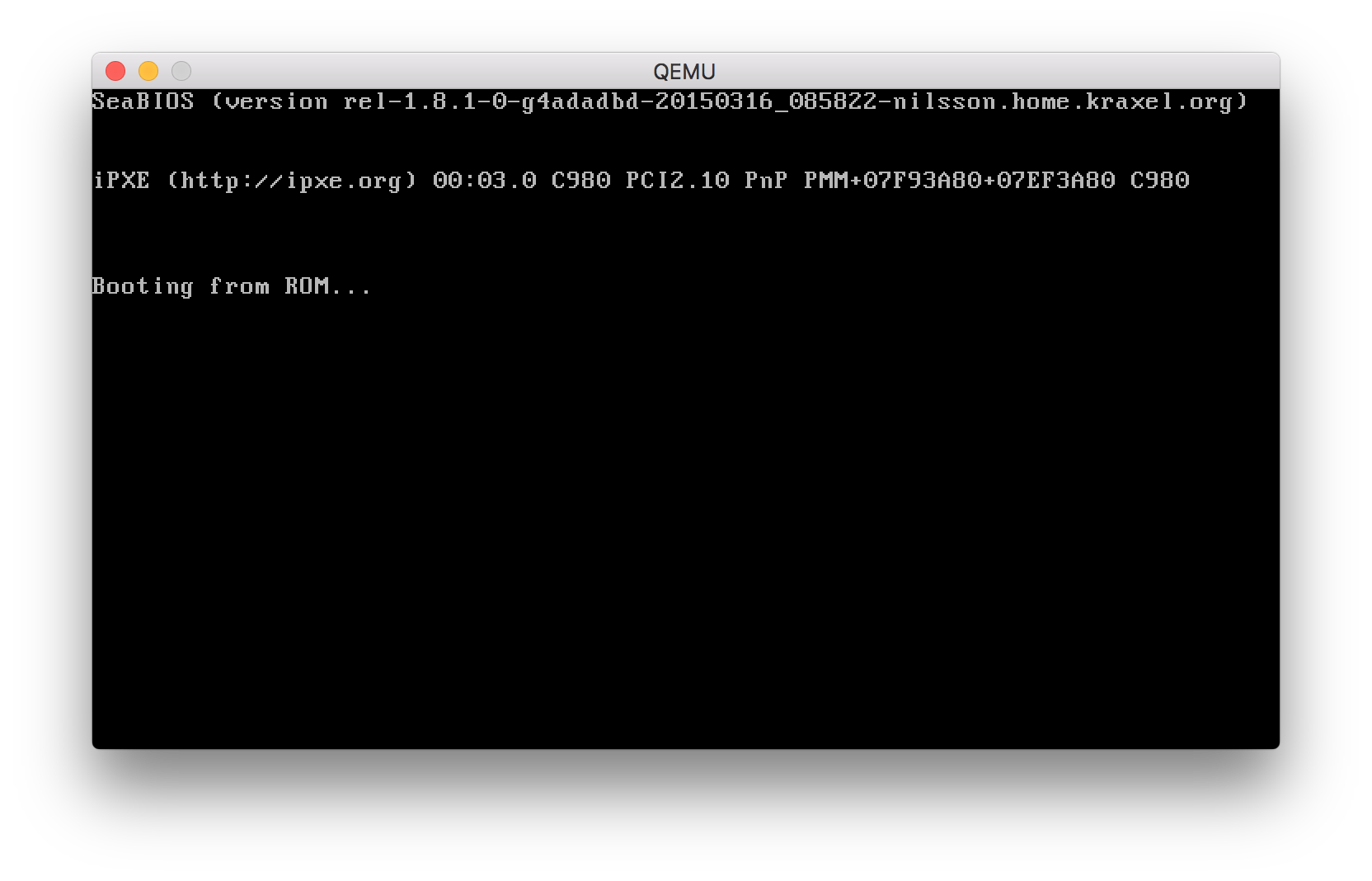 It does nothing successfully. To see what this really looked like early in development, browse the initial commit of Tetrasm.

In order to put “Hello, world!” on the screen, some video functions are needed.

The x86 has six general-purpose registers: eax, ecx, edx, ebx, esi and edi. The calling convention defines the first three as “caller-saved,” and the latter three as “callee-saved.” This means that if the calling function needs the values in eax, ecx or edx preserved, it is responsible for pushing them onto the stack. If the function being called needs to use the ebx, esi or edi registers, it is responsible for pushing those onto the stack.

Parameters passed to functions are simply pushed onto the stack in reverse order. In order to access these parameters, the base pointer ebp is pushed then set to the current stack pointer esp. This means that parameters can be accessed starting at ebp + 8 (4 bytes for the pushed original value of ebp and 4 bytes for the return address pushed by call). At this point, esp can also be incremented to make space for local variables, which would be at ebp - 4, for example. Functions return values in eax.

For example, a function that takes three double-word parameters and uses two double-word local variables, with all registers being saved, would look like this.

If the initial esp were 0x1000 at the beginning of caller, the stack would look like this inside the body of callee.

Most of the time, thankfully, not all registers need to be saved and local variables are often unneeded.

In text mode, each cell or character on the screen is represented as a 16-bit word. The upper byte holds the attributes, i.e. foreground and background color, and the lower bits hold the ASCII character.

The screen has 80 columns and 25 rows, which are mapped to contiguous memory starting at 0xB8000. These are useful values to define as macros.

The attribute byte is further split into two nibbles (4 bits), where the high nibble holds the background color and the low nibble holds the foreground color. The highest bit of each nibble can also be set for bright variants of the colors. There are seven possible colors: black, blue, green, cyan, red, magenta, yellow and gray.

The values are shifted by 8 and 12 bits so they can be bitwise-OR into character words.

The first thing to do is clear the screen of the previous output from the BIOS. The clear function will take a character/attribute word as a parameter and write it to every cell of the screen. It will be using edi for this, so its prologue and epilogue will look like this.

Since it will be writing the same word over and over, it can actually duplicate that word and write half as many double-words.

This zero-extends the word to a double-word, copies it, shifts it into the high word, then ORs the copy back in.

It then uses the string operation stosd7 with rep8 to fill the entire screen.

Now main can clear the screen. Getting closer to “Hello, world!”, I promise. 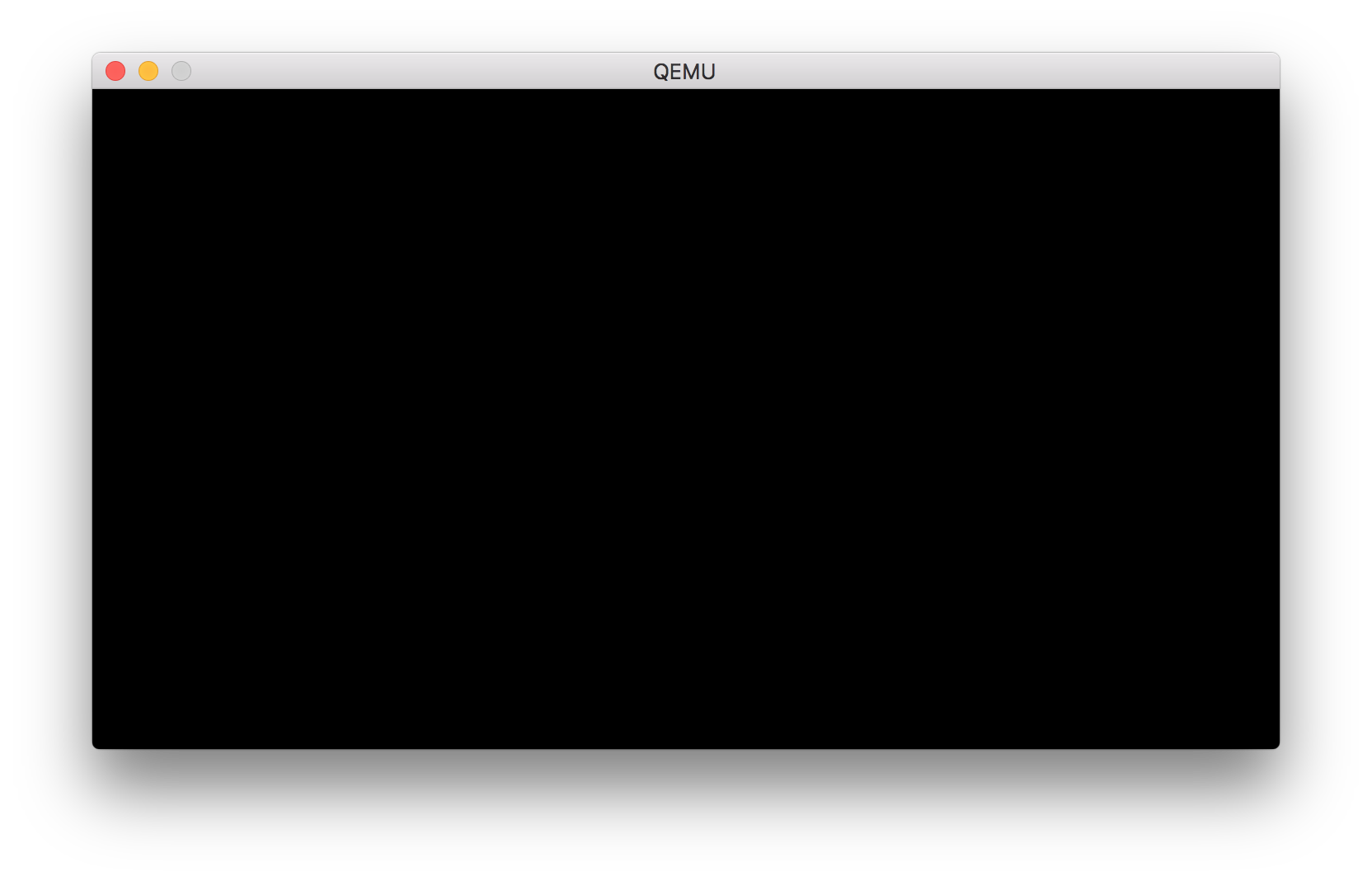 The function needed to put strings on the screen, puts, is a bit more complicated. As parameters, it will take a pointer to a C-style null-terminated string, a word of attributes to apply to the whole string, and a set of coordinates as a word. It will be using esi and edi, and needs to be able to exit out of a loop, so its prologue and epilogue look like this.

Because x86 is little-endian, the y-coordinate is in the byte after the x-coordinate.

Next, edi and esi are set up to point into VRAM and to the beginning of the string. The attributes word is also loaded into ax.

The offset in eax is multiplied by two since the cells are words.

The loop of puts loads characters from the string, exiting when it hits a null byte, then writes the character with attributes into VRAM.

Each character is loaded into al, leaving the attributes in ah untouched.

The coordinates (1, 1) are pushed in the same double-word as the attributes. 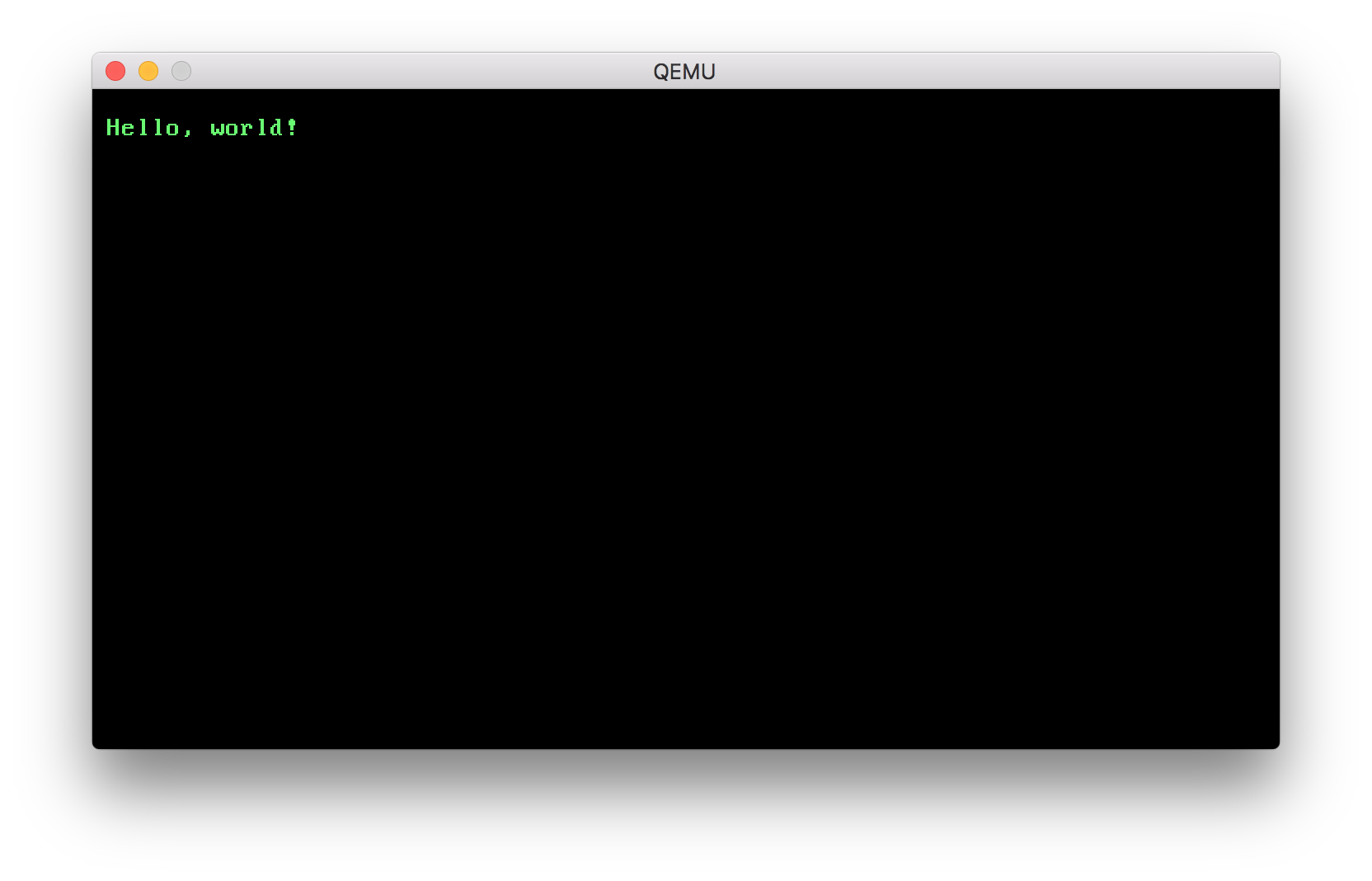 It took a lot longer than I thought it would just to get to this point, and it’s not even close to Tetris at all. For now, it’s a good idea of what one might do when starting an OS in assembly. Part two and more will come in the future, and links will go here.