I recently dug up my HP Chromebook 11 again and wanted to install a BSD or Linux on it to use as a lightweight and distraction-free development environment. I used splat to install Arch Linux ARM which worked flawlessly.

To the distraction-free end, I decided not to install X.Org and stick to the console. It’s not the most comfortable environment by default, but it can actually be configured in many of the same ways as graphical terminal emulators! 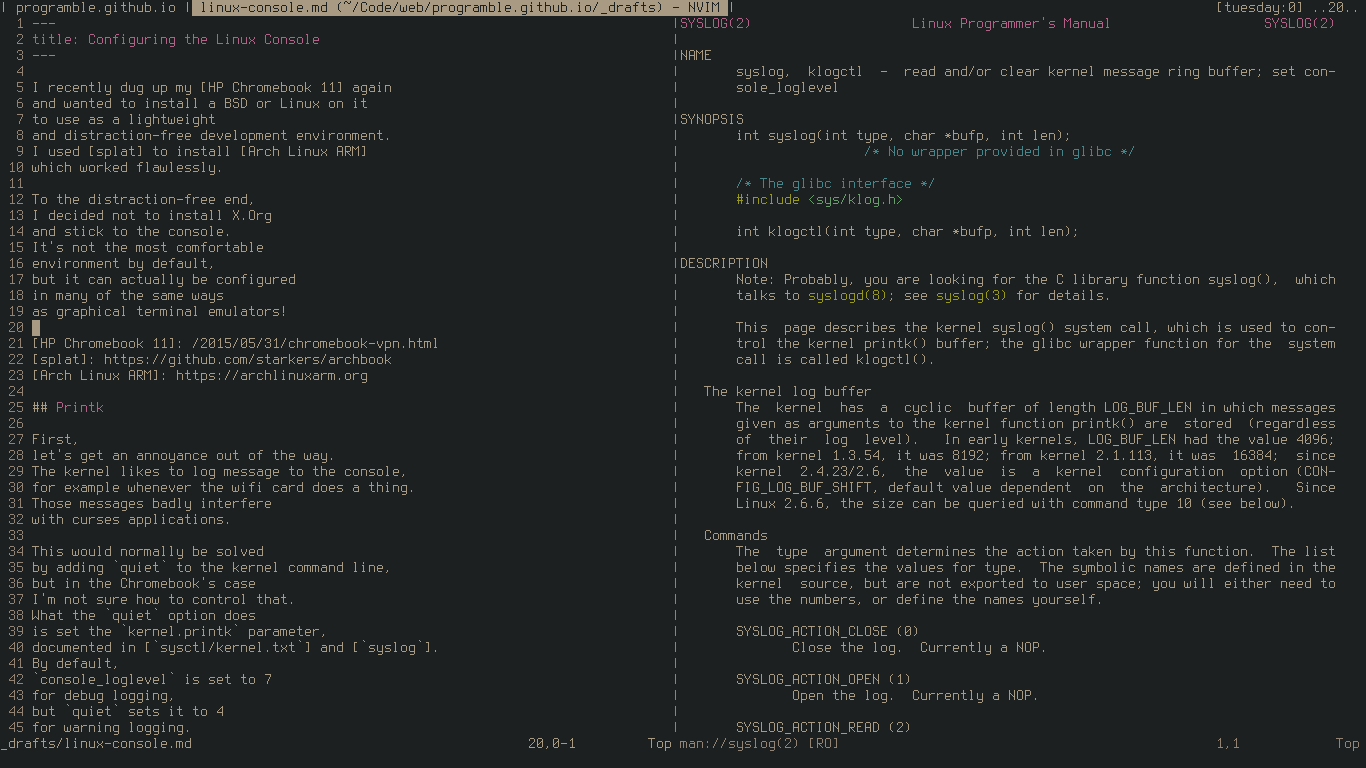 First, let’s get an annoyance out of the way. The kernel likes to log message to the console, for example whenever the wifi card does a thing. Those messages badly interfere with curses applications.

This would normally be solved by adding quiet to the kernel command line, but in the Chromebook’s case I’m not sure how to control that. What the quiet option does is set the kernel.printk parameter, documented in sysctl/kernel.txt and syslog. By default, console_loglevel is set to 7 for debug logging, but quiet sets it to 4 for warning logging.

The parameter can be set manually with the sysctl command, and made permanent in sysctl.d:

Bitmap fonts for the console can be found in /usr/share/kbd/consolefonts, and can be loaded with the setfont command. A simple shell for loop can be used to try each font. The -16 option to setfont selects the 16-pixel high variant in files which contain several sizes:

Most of the fonts are DOS-nostalgic, but there are a few quirky ones such as cybercafe, and a nice version of Terminus called Lat2-Terminus16. A few extras might be packaged in your distribution of choice.

The console font can be set permanently in /etc/vconsole.conf:

The palette used by the console for each of the 16 terminal colours can be set using escape sequences documented in console_codes. The relevant sequence is ESC ] P nrrggbb, which sets colour n to a hex RGB value.

I wrote console.sh, which sets Gruvbox colours then clears the screen. Without clear, the palette would only apply to newly printed characters. The easiest way to make these colours permanent is to add the escape sequences to /etc/issue, which gets printed before the login prompt on every TTY:

By default, the hardware cursor blinks, which can be annoying. It can be disabled by writing 0 to /sys/class/graphics/fbcon/cursor_blink. It can be made permanent by writing a file in tmpfiles.d:

The default cursor shape is an underline, but can be changed to a block with an escape sequence. The terminfo database defines the capabilities cnorm, civis and cvvis for normal, invisible and “very visible” cursor, respectively. These are loosely defined, but “very visible” on the console results in a block cursor.

The tput command prints escape sequences from the terminfo database. Running tput cvvis directly on a console sets the cursor to block temporarily, but curses applications reset it with cnorm. In tmux, cvvis doesn’t do anything at all. However, tmux has an option for overriding terminfo, which can be used to set cnorm to the sequence for cvvis:

Keymaps control how the raw input from the keyboard is translated to logical key presses. Similar to fonts, default layouts are in /usr/share/kbd/keymaps and can be loaded with the loadkeys command.

As described in the keymaps(5) manual page, keymaps can inherit from each other using the include directive. This makes it easy to add overrides, for example, to the default US QWERTY layout in i386/qwerty/us.map.gz. The showkey command can be used to observe the raw keyboard input.

The layout I use has caps lock mapped to escape and many keys swapped with their shifted counterparts. My custom.map file looks like this:

I also mapped right alt to compose key, which I didn’t know was supported on the console. The default sequences are listed in include/compose.latin1, and more can be added in keymap files.

In the same way as the font, the keymap can be set permanently in /etc/vconsole.conf:

As a final note, these are the applications I use on the console: